As some of you may know, we have a lot of cats. We have 3 indoor cats (all featured on my last post) but we also have approximately 11 outdoor cats. These were not cats we chose but cats who chose us and many appeared when a lot of the houses in our neighborhood were foreclosed so we assume they were dumped by their owners. However, there have always been a lot of cats in this area and some are feral cats and descendants of other feral cats. We have neutered most of them but we currently have 3 in need of neutering and, unfortunately, we think they are all females and they are all feral so they must be trapped.

I also said “approximately” 11 cats because we also have 2 neighbor cats who eat at our house almost daily as well as a few other strays and homed cats who irregularly drop by. It’s a handful but we have beds for them and feed them well and, if they’re tame, they get vet care when they need it. The ferals sometimes cannot be caught when/if they are ill and some have headed off to the alleys around here to die over the years.

WB is the one we have had the longest (probably 5 years) and he’s definitely the “top cat” outside. He rules with an iron paw and yet is gentle and loving to the other cats most of the time but he will gladly break up a fight or smack someone who deserves it. He is also the most loyal of all of them and is always here in our yard. Well, this morning when I went out to feed the crowd, he was laying in a flower bed in a strange position with his head down in the dirt. I picked him up and he could barely walk and fell over. Fortunately, we have a vet nearby who is open 7 days a week so we took him in this morning, prepared for the worst. The worst would have been feline leukemia which would have caused us to euthanize him as it is very contagious. He did test negative for that but positive for FIV, which is also a bad feline virus but not very contagious at all. It is spread by bite wounds primarily and is not easily passed around in other ways. WB was an adult cat when he showed up here and had several battle scars so he has been in a lot of fights. Now the only fights he gets in are little scuffles and he doesn’t inflict bite wounds.

But he is critically ill. The vet said, without treatment, he would probably not have lasted the day. Odd, because last night he seemed fine, ate his dinner, and we had no clue he was sick. In retrospect, he may have been sleeping more lately but that is hard to determine since cats sleep almost all the time anyway and we’re not around him constantly. So, he is at the vet, having more tests run to see what underlying cause compromised his immune system, as well as receiving fluids and antibiotics. We are going to attempt to treat him since he is so sweet and special. If he pulls through the next couple of days and gets to feeling better, we will bring him home. The vet said he would be better off being an indoor cat and that may be possible, although I think he would prefer to go back out to his family. We are just going to play it by ear. We have a big cage that he can recuperate in for a few days and then we’ll see if he will stay in or go back out, depending on several factors, including if he wants to stay in, and if our other indoor cats will tolerate him (they have met him before and seem to get along okay). Time will tell but, first, he has to get through the next 24 hours. The vet did say he might pass regardless of what we do.

Here he is snuggled up with Ebony (on top), who is related to him in some way but definitely not his son. 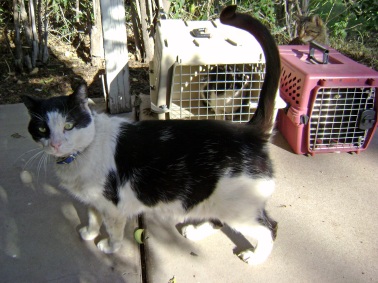 Here he is saying goodbye to 2 of the girl cats who were off to be spayed.

Cuddling (above) with his fam. We thought he was about 5 or 6 years old but the vet we had today thinks he is closer to 10.

Anyway, I’m sure he’d like to receive some good thoughts or even prayers sent his way, if you feel like it.