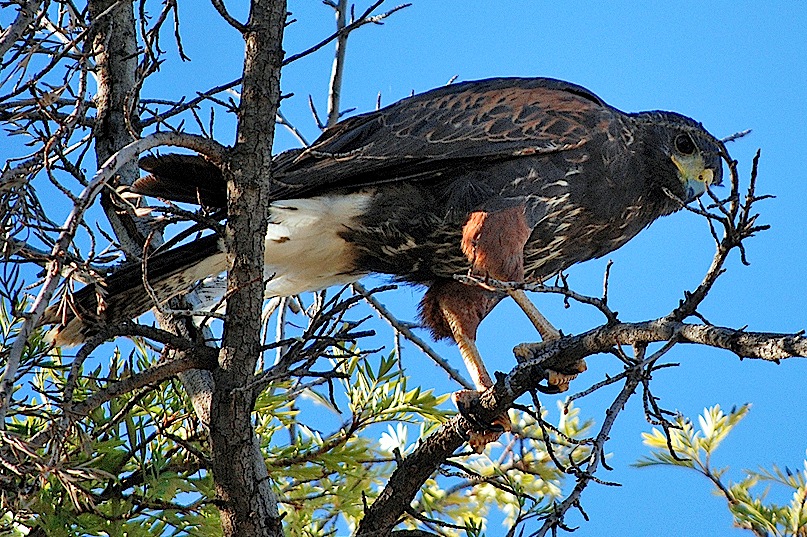 No, Not In My Back Yard but in our front yard…and there were two of them, one in each of our silk oaks!

I have taken a ton of photos over the last few days of one or both of these Harris’ hawks. But the day they were actually in our yard yielded the best pics so far. 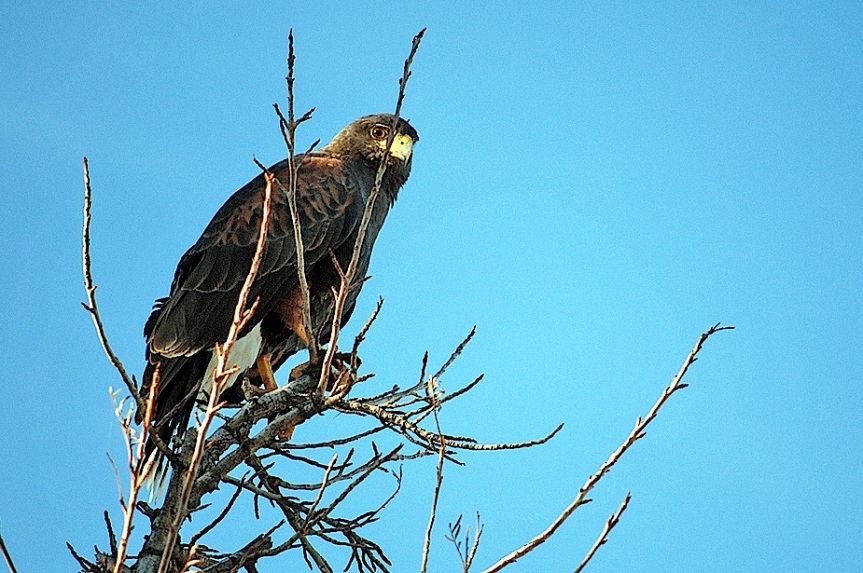 This is the chatty one, above. Have you ever heard a hawk call? Not the most attractive sound in the world, quite abrasive, really. The other one wasn’t saying anything so I don’t know if this is a male courting a female or what. 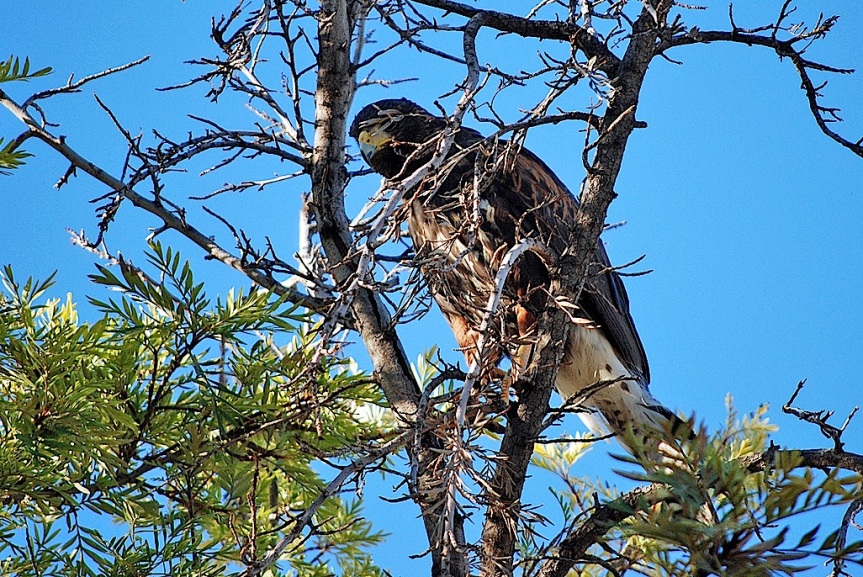 And this is the quieter one, above. 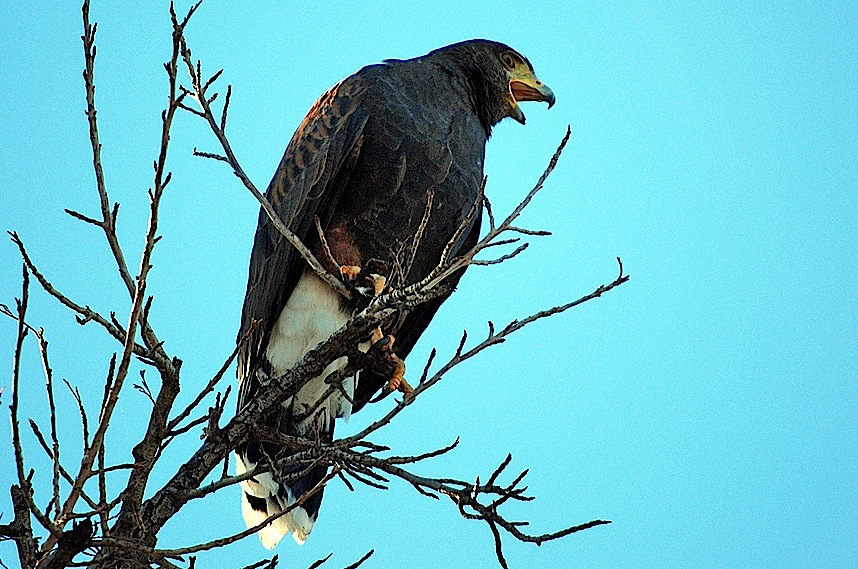 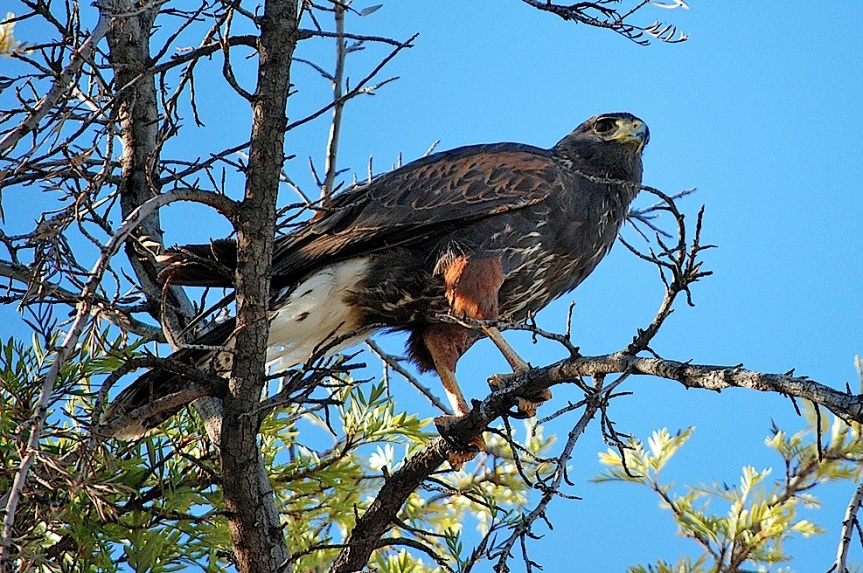 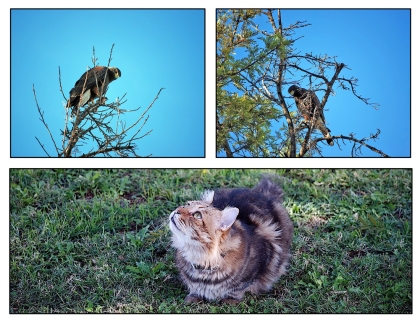 Of course, when the hawks showed up a few weeks ago, we were a little concerned about our outdoor cats. But two Harris’ hawks were here last spring and early summer also (possibly the same ones as they seem to like the same fir tree of our neighbors’ as the previous ones did), and none of our cats or anyone else’s were harmed. Hawks don’t often go after prey that large~they prefer small rodents and smaller birds. So, although it’s a little disconcerting, we are hoping everyone will continue to be okay (fingers and paws crossed). 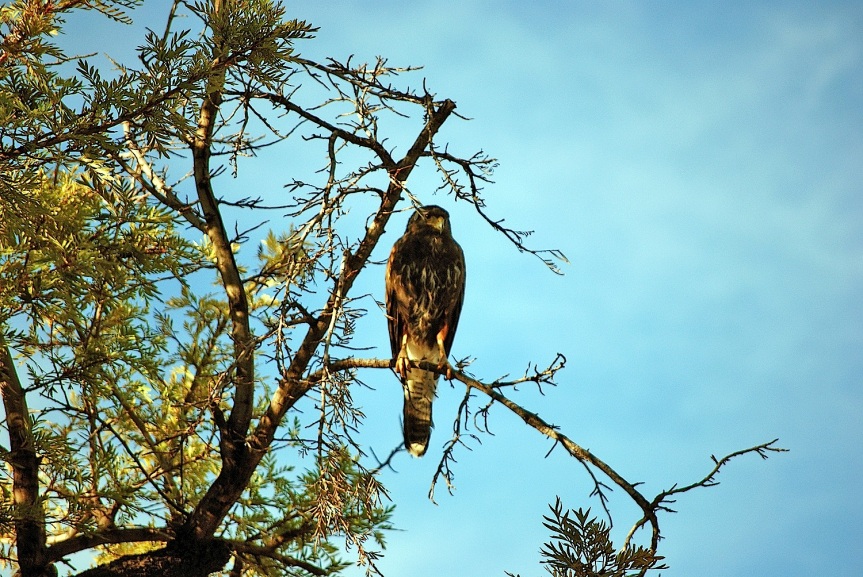 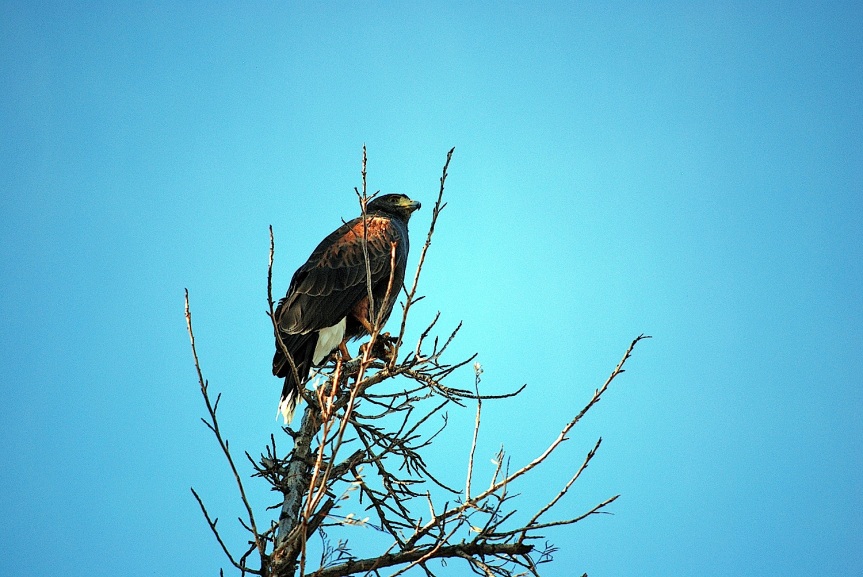 The previous hawks nested in our neighbors’ tree and they have 2 cats living in their yard who would lay right under the tree and the hawks didn’t bother them. Those hawks had 2 fledglings who became sick from a bacterial illness that young hawks often get from dove meat. The neighbors called a rescue group in our area, Liberty Wildlife, that came and rescued the fledglings and said they would survive with antibiotic therapy. After that, the 2 hawk parents left for several months and now either they or some others have returned.

Here are a few photos of one of these hawks (the chatty one) from a couple days earlier. 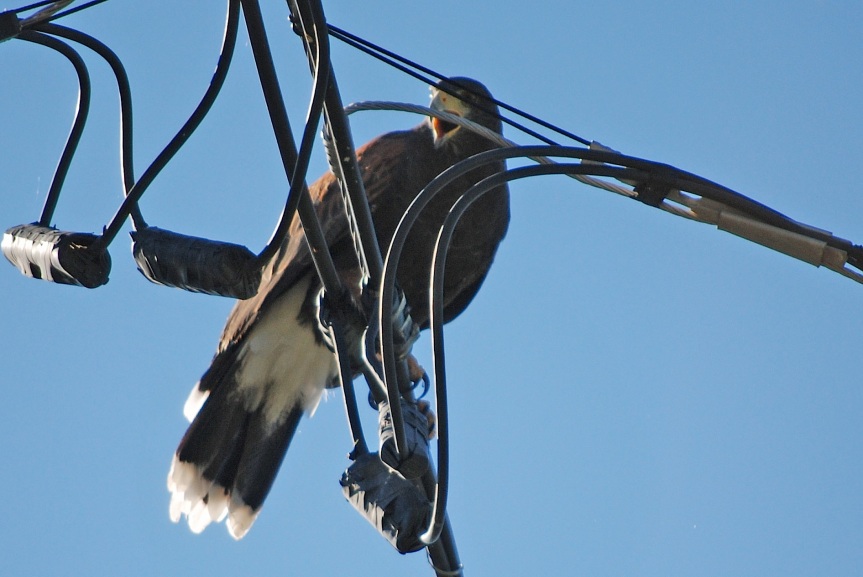 Harris’ hawks are common urban dwellers now; however, electrocution is their largest cause of death in the city (citation). Apparently, many more are injured from power lines, too. In fact, about 20 years ago, I found an injured red-tailed hawk along one of the local canals. I called Liberty Wildlife then and they immediately came out and rescued him. They told me the next day that he had been electrocuted and had internal damage and might not survive. 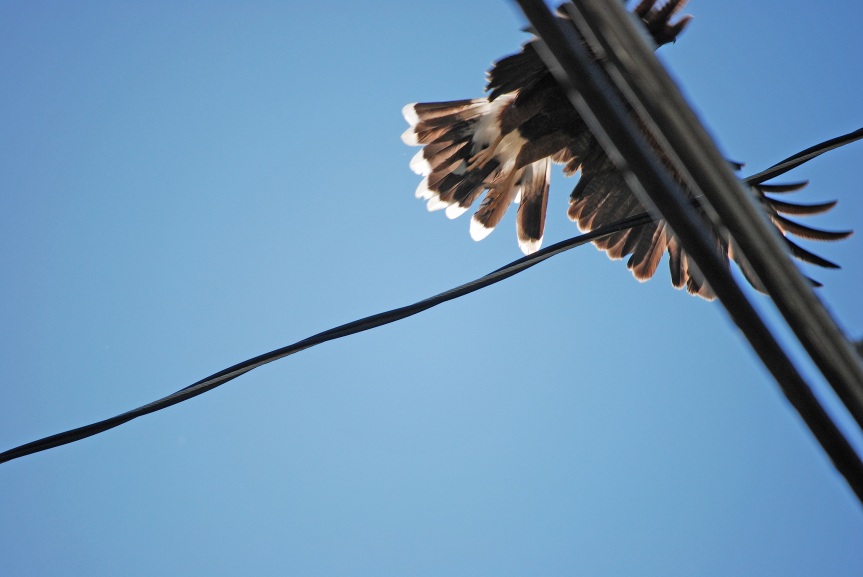 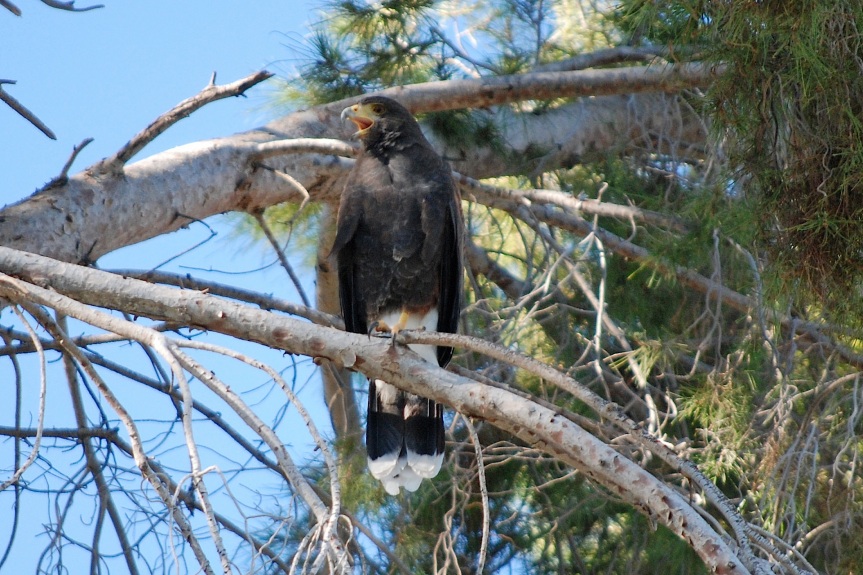 Here he/she is in the huge tree that the hawks nested in last spring. 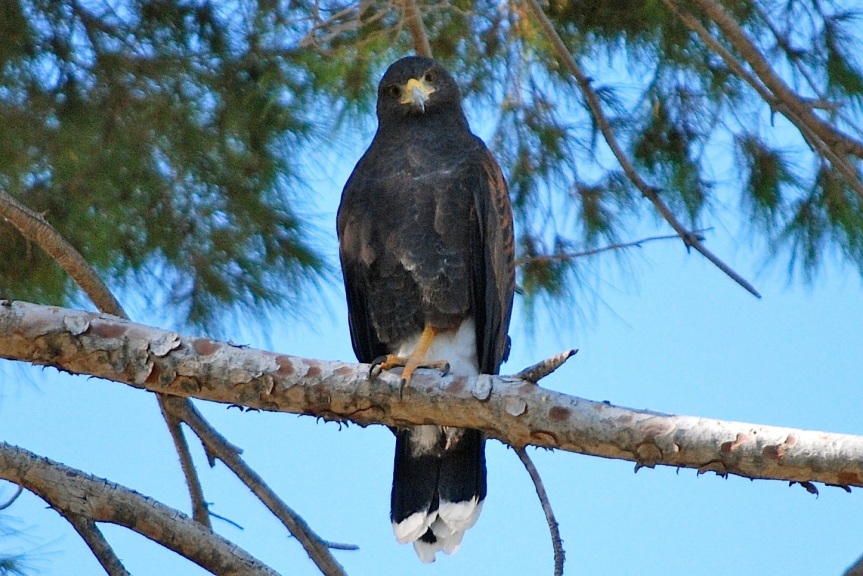 There is something very majestic-looking about them but when they make direct eye contact with you, it’s a little unsettling. Those intense brown eyes…I don’t think he/she appreciated being a photo opp. 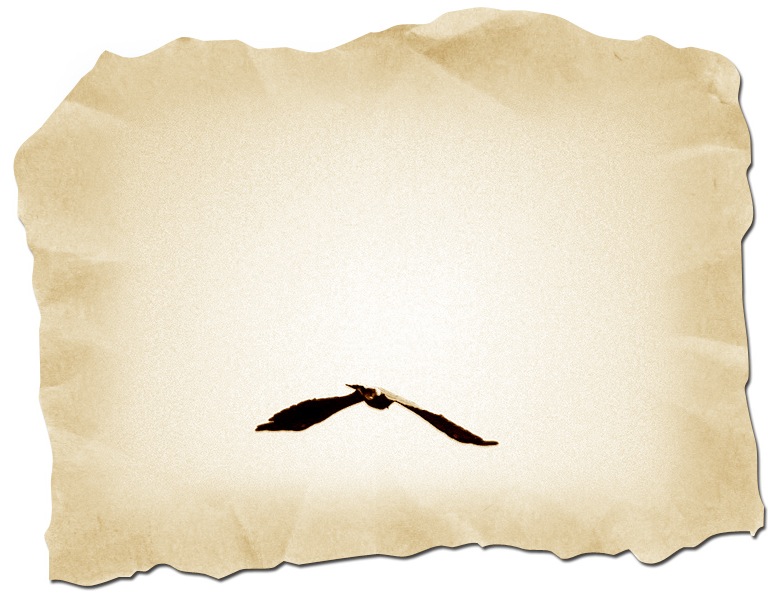