Two groups I’ve belonged to in the past, The Sierra Club and the National Audubon Society, both promote hunting, as do several other conservation organizations (here is a list of some of them).

I, personally, would never hunt. I haven’t eaten any animals in over 30 years and shooting at anything doesn’t appeal to me. But I’ve known hunters who were nice people. I’m not talking about trophy hunting or big game hunting or game ranch hunting. That seems to be an ego trip for rich people that have nothing better to do (you know, like the shiftless Trump boyz).

But I’ve been thinking about this for awhile, partly because about 6 months ago I was contacted by the Publications Design Director of a large 501 (c) 3 organization who found a photo I had taken of a Gambel’s Quail on Flickr and wanted to purchase it for one of their magazines. It was a nice amount of money and I didn’t have to do anything but give permission for a photo I took over 3 years ago. Plus it was going to be a 2 page contents spread. I said yes, of course! This organization is “dedicated to the conservation of quail, pheasants and other wildlife through habitat improvements, public awareness, education, and land management policies and programs.”

I finally (!) have been paid and have copies of the magazine but I was embarrassed to tell people because it almost felt like “dirty money,” because I consider myself a conservationist, a lover of nature and wildlife, and an animal advocate, not to mention a birder and nature photographer. So that was when I started reading about conservation organizations that promote hunting. It turns out that I’m not the only one conflicted.

Here are a few things I learned:

Hunting does two main things for conservation. One, it acts as a funding source for state agencies that help conserve habitat. While this money could come from somewhere else, the reality is that in North America, much of it comes from hunting. Secondly, it helps control prey species (deer, elk, bison) who might otherwise have population explosions due to reduced predator populations (reduced from hunting). Source.

This particular article also quotes Arizona Game and Fish Department which, of course, does promote hunting but also saves plenty of animals and monitors our Bald Eagle population, “In some states, the number of hunting and fishing licenses sold has remained stable in recent years. But given the rate of population growth, particularly in Western states, the percentage of people participating in hunting and fishing is actually decreasing. There is no alternative funding system in place to replace the potential lost funds for conservation. If hunting ends, funding for wildlife conservation is in peril.”

This is from a fascinating National Geographic article: “From Charles Darwin and John James Audubon to Theodore Roosevelt and Ernest Hemingway, the most enlightened hunters have long viewed themselves as naturalists and conservationists, committed to sustainability among animal populations and the preservation of wild places where they stalk game. The linkage has become inextricable. Revenues of hundreds of millions in federal excise taxes levied on hunters go directly to wildlife management and related activities each year in the U.S. alone. And anyone who keeps a freezer full of venison is likely to tell you that the act of killing your own dinner in the wild is more humane than buying the plastic-wrapped meat of industrially raised livestock.” Source.

And from Audubon: “Every hunter is a birder in the rough, and an ally in our efforts to protect species and open spaces.” Source.

And, in fact, another Audubon article specifically mentions the national organization that bought my photo (Pheasants Forever/Quail Forever): “We raise money, buy cornfields with drained wetlands, restore the habitat, and donate it or give it away. That’s where the Bobolinks and Dickcissels live and where the prairie ducks nest. And the pheasants and pheasant hunters get to use it, too.” Source.

So, what can I say? I don’t feel as dirty about my little check and, in fact, I used that check to purchase something that benefitted other organizations, Wildlife Conservation Network (wildnet.org), and the Jane Goodall Institute (janegoodall.org). We all have our own agendas and can rationalize our actions, good or bad.

I do feel a little bad that on the contents spread where my photo is, there is an article called “Simple Roasted Quail.” I won’t be having any.

This is the issue: 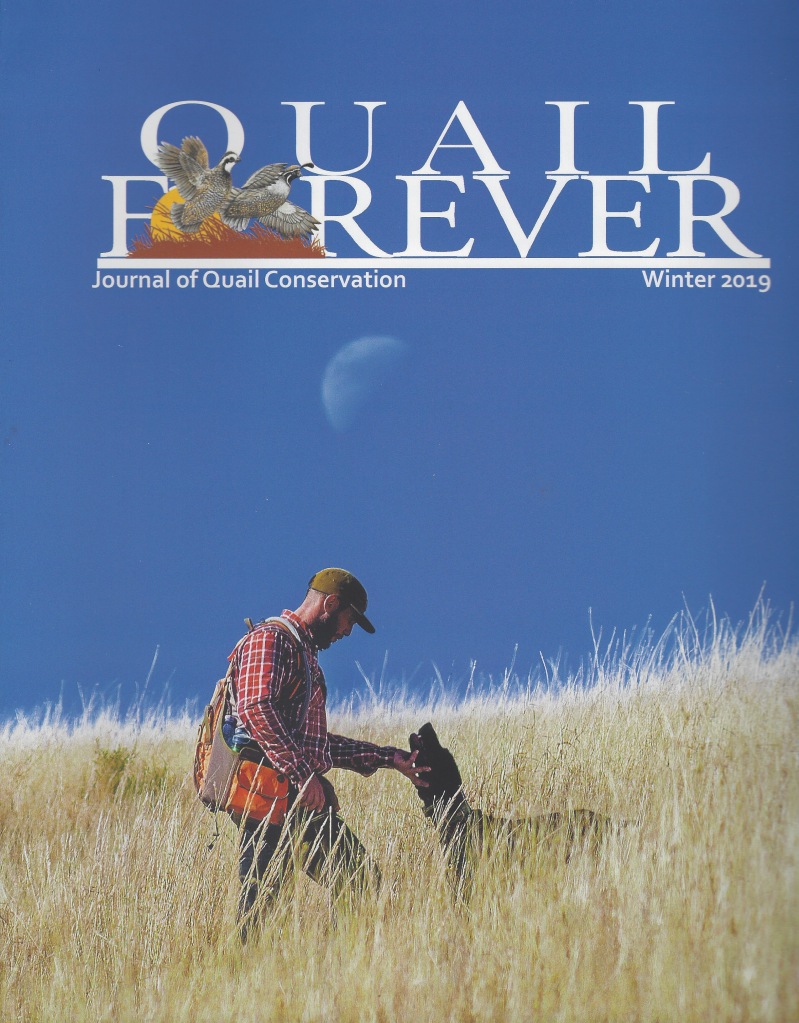 This is the photo. Imagine it as a 2 page spread with the contents printed over it. Our scanner isn’t big enough for me to scan it.