“How many peanuts can I fit in my bill?”

It was an exciting day in the yard last week when yard bird #38 showed up, haven’t seen it since:

This was also exciting (to me). After 24 years of living in this house and having our aloe veras multiply exponentially so that there are now several beds of them, we had one that bloomed yellow. How that hasn’t happened until now and why it’s the only one that is a different species is a mystery. The hummingbirds love the orange ones but didn’t seem impressed by this yellow one so the bees took over. 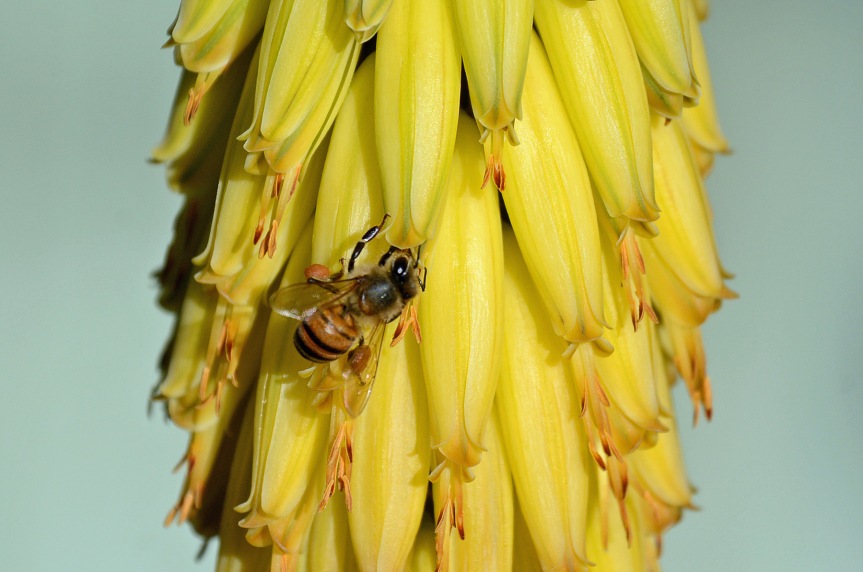 Prepare for cuteness. This little Anna’s fledgling wants her mom to keep feeding her but mom thinks she needs to be on her own, with a little supervision: 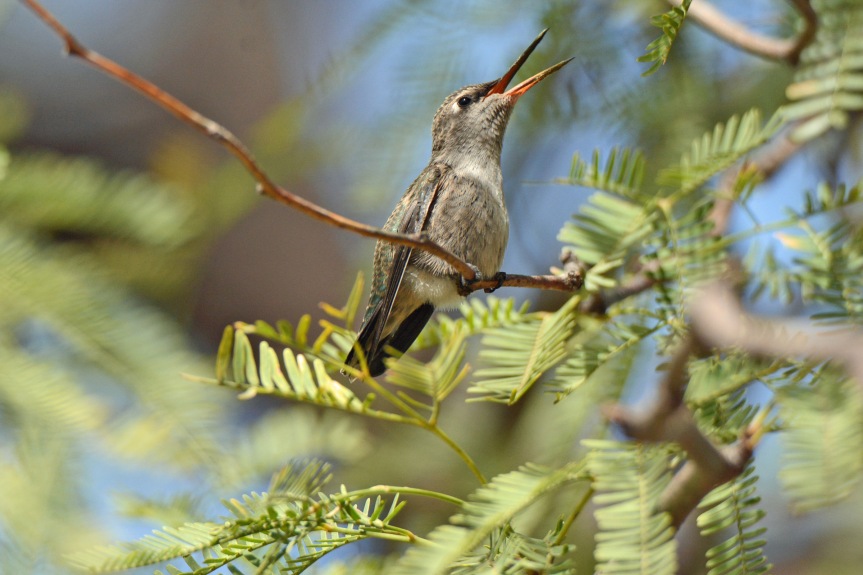 You can see she’s able to find food with all the pollen on her bill. She just wants her mom to do it.

Here is my NSFW (Not Safe for Work) image, pretend it’s Nat Geo:

A sure sign of spring in the desert is the return of these guys, who love to drink the nectar from saguaro blossoms. As far as I know, there are very few or no saguaros in our neighborhood but we always get a few of them who hang out here. The blue eye shadow is very noticeable.

My little Orange-crowned Warbler that stayed in our yard for the last 5 months has now migrated, too. Hope he or she returns in the fall. 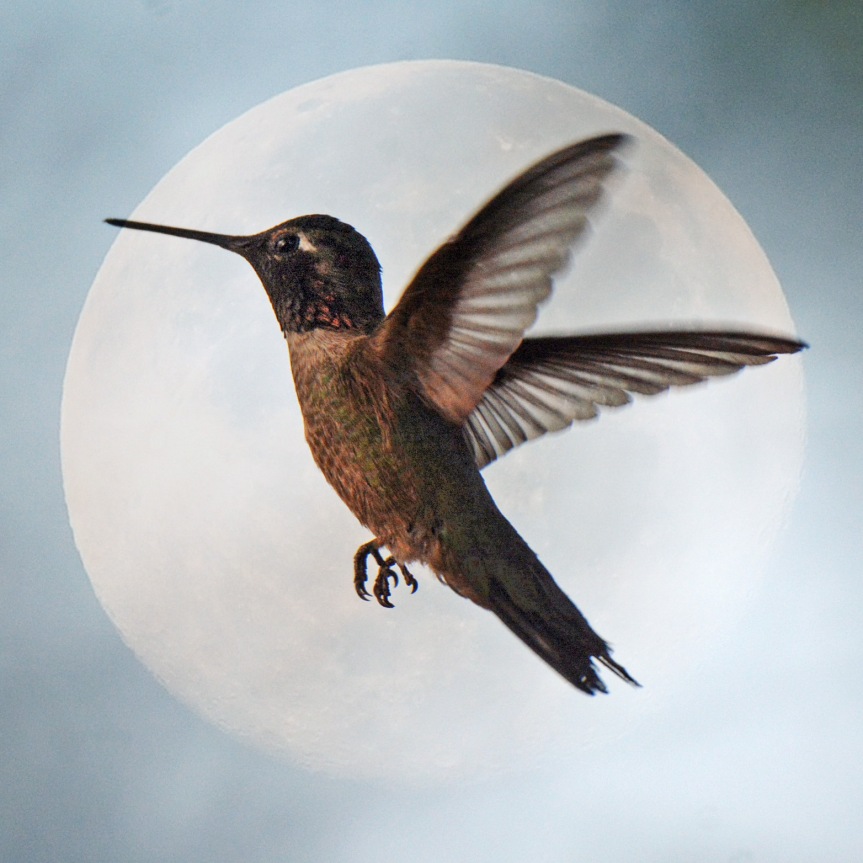 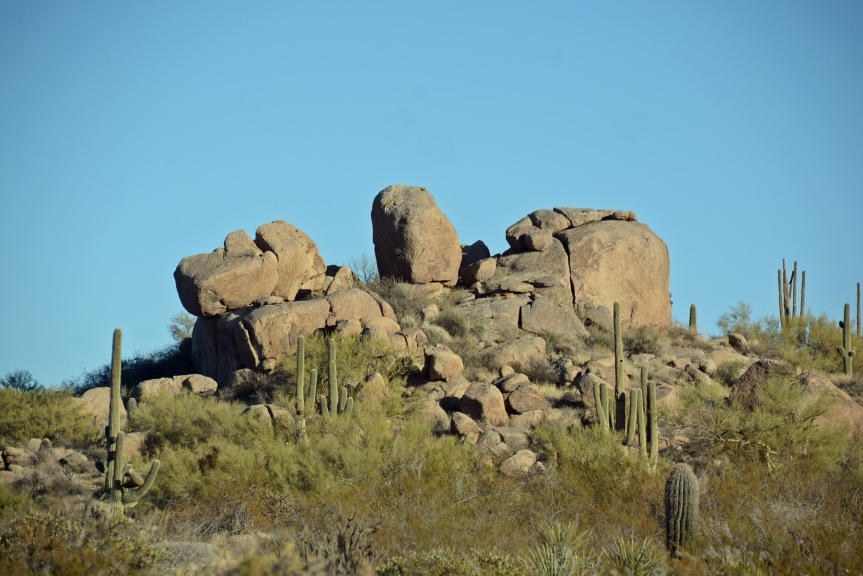 Brown’s Ranch was founded in 1917 by E.O. Brown, a Scottsdale entrepreneur, and encompassed 44,000 acres at its peak, supporting 3,000 to 5,000 head of cattle. His descendants lived on the ranch until 1970. After changing hands several times, the remainder of the ranch was acquired by the City of Scottsdale in 1999 for inclusion in the Scottsdale McDowell Sonoran Preserve. The Preserve is a large, permanently protected, sustainable desert habitat that includes an interconnected network of non-motorized, multi-use trails (hike/bike/horse) accessed from multiple trailhead locations over 30,500 acres. It is the largest urban park in the U.S. 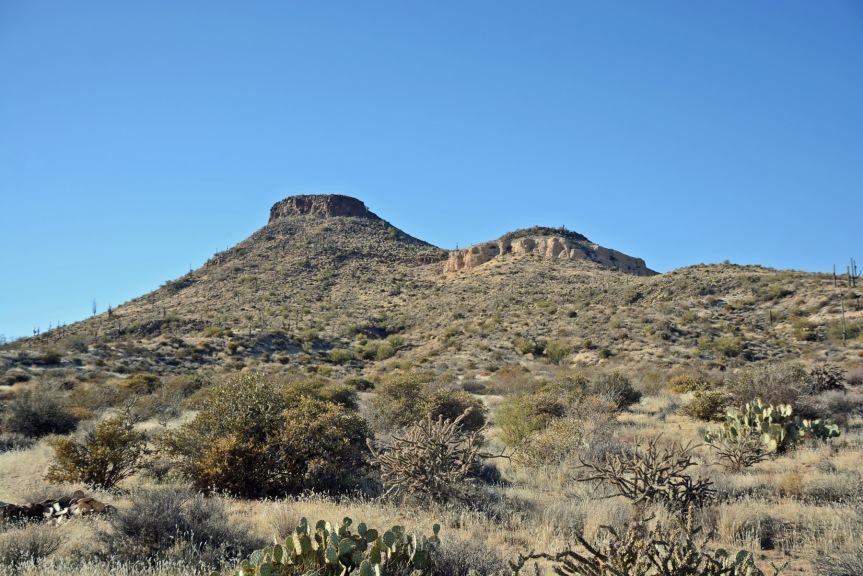 It was a sunny, windy day and the 3 mile Brown’s Ranch Trail just got prettier and birdier the farther we went. We’d never been to any part of the Preserve before and I had no idea it was so beautiful. The trails were great. We’ll be exploring more of it soon. 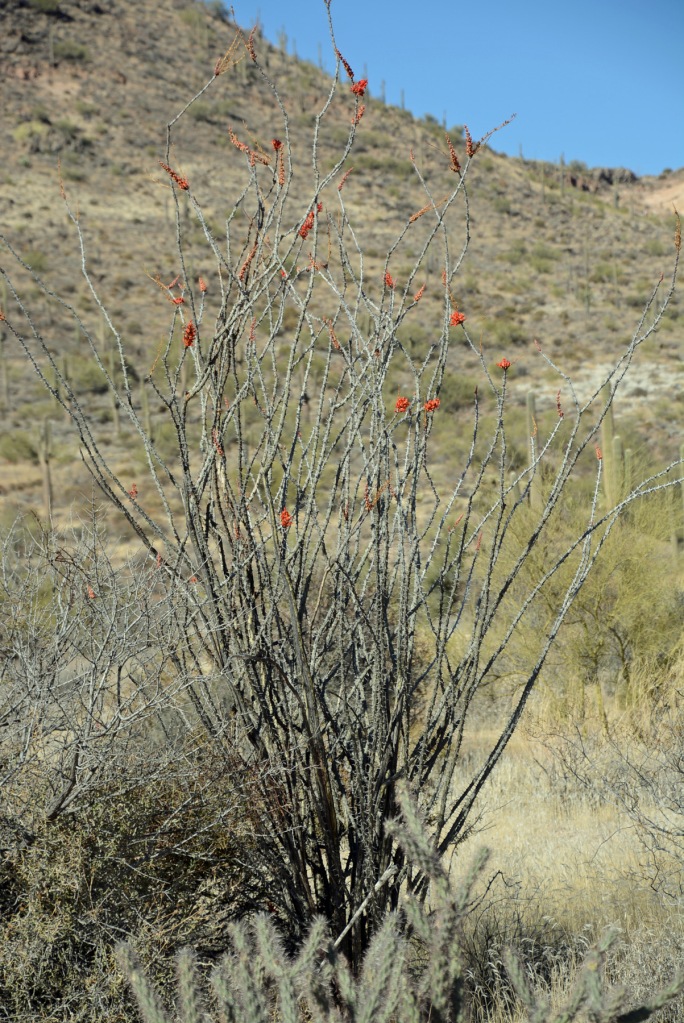 I imagine in the spring, when the desert is in bloom, that it is even more spectacular. 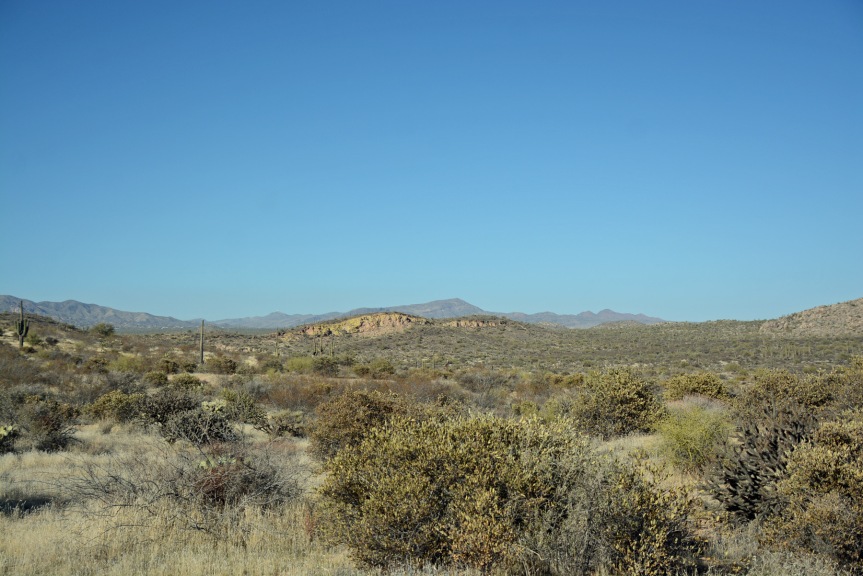 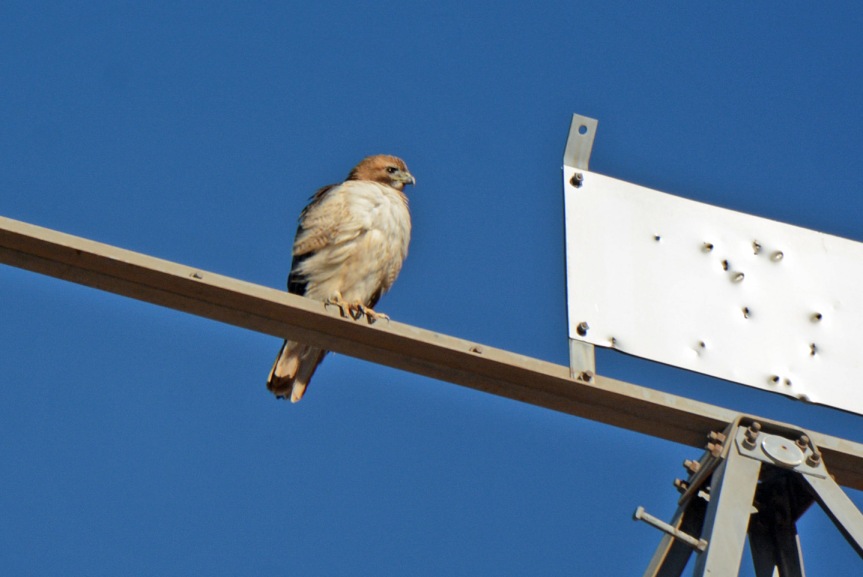 Yes, those are bullet holes even though shooting is not allowed in the Preserve. But this is Arizona, the Wild West. 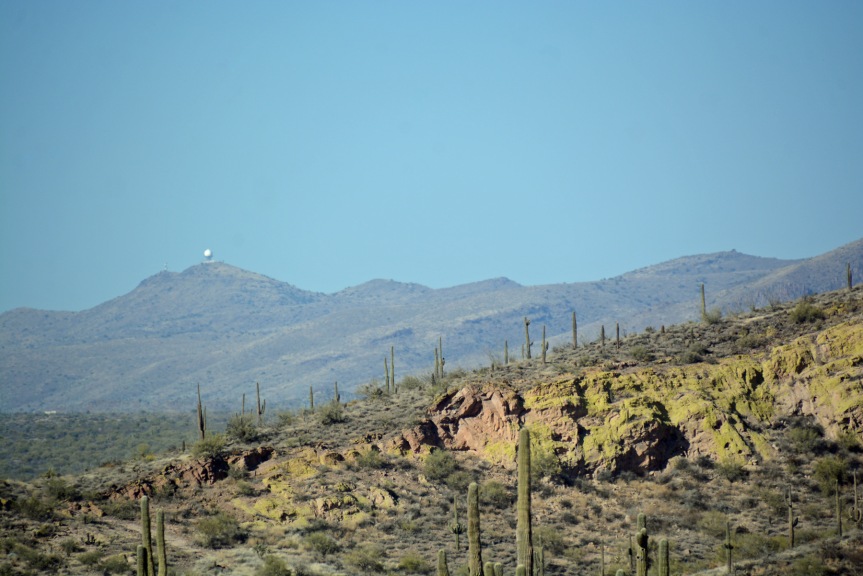 There were no lifers but it is definitely on the “return to” list, at some point. And I learned that birds love dried agave stalks so I am in search of one for my backyard photo props. 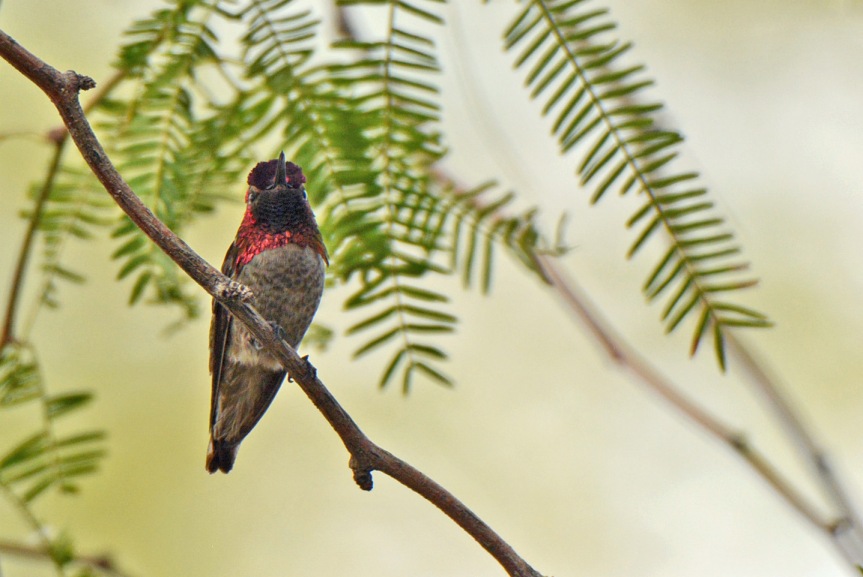 I’ve gone birding a few times lately with a new birder friend, Karen. We went to several places that Tony and I have actually been to so I didn’t take the lens I use for landscapes, only my birding lens. And, of course, I got very few birds at those places so this post is just a sample of some of those birds as well as a few in my yard. These first few are yard birds. 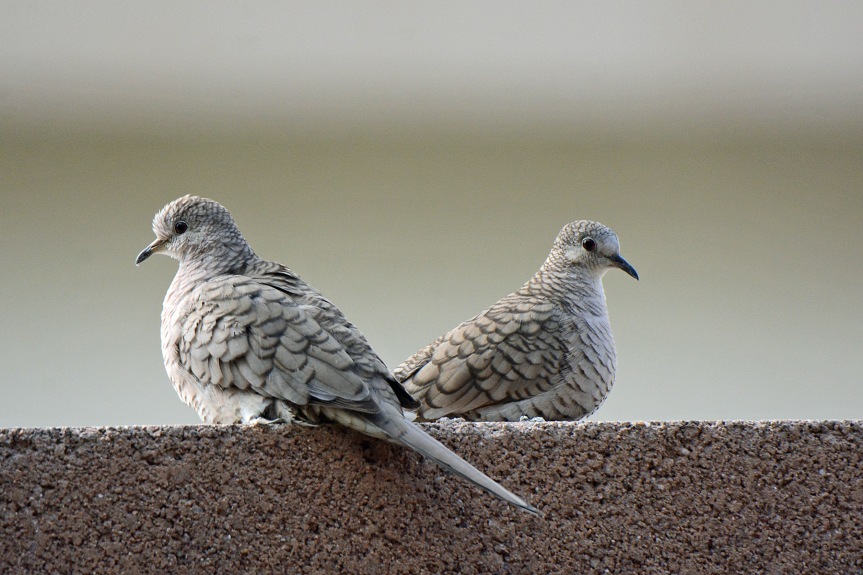 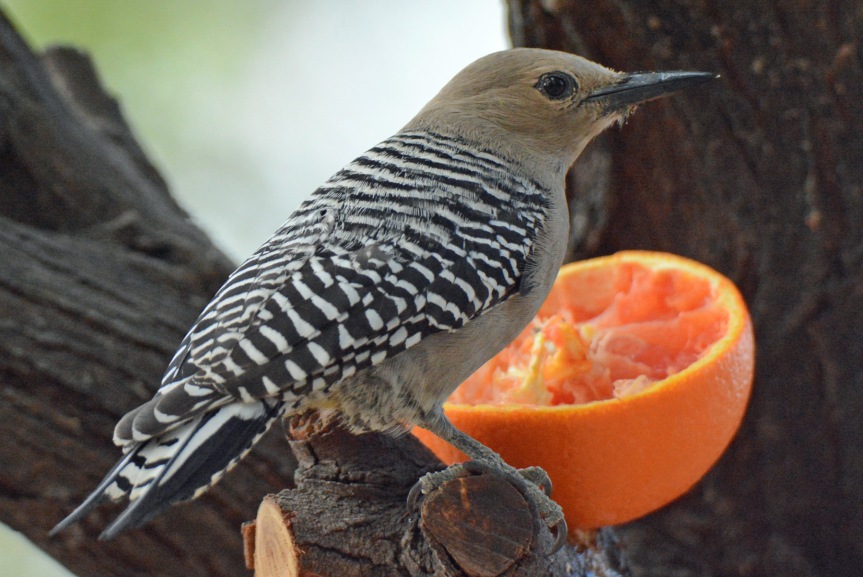 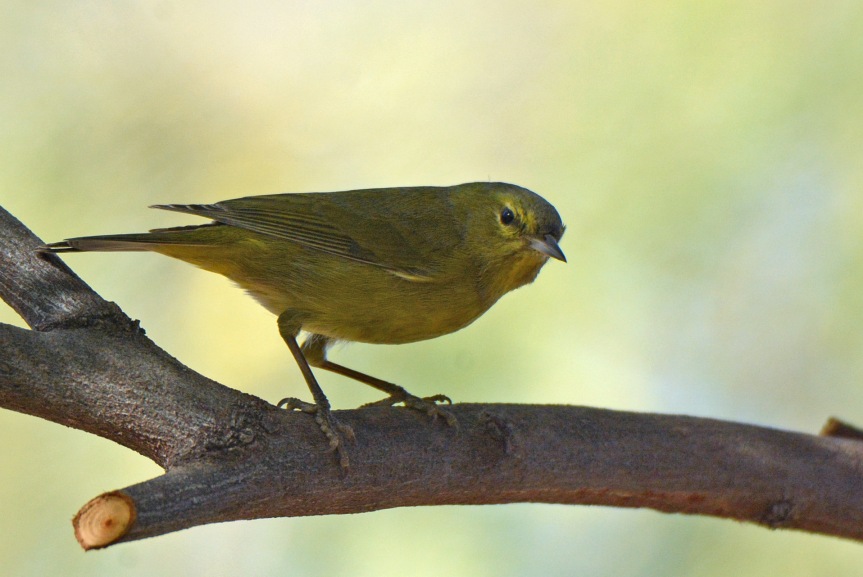 One of the places Karen and I went to was Arlington, full of agricultural fields, where Tony and I were in January (post). 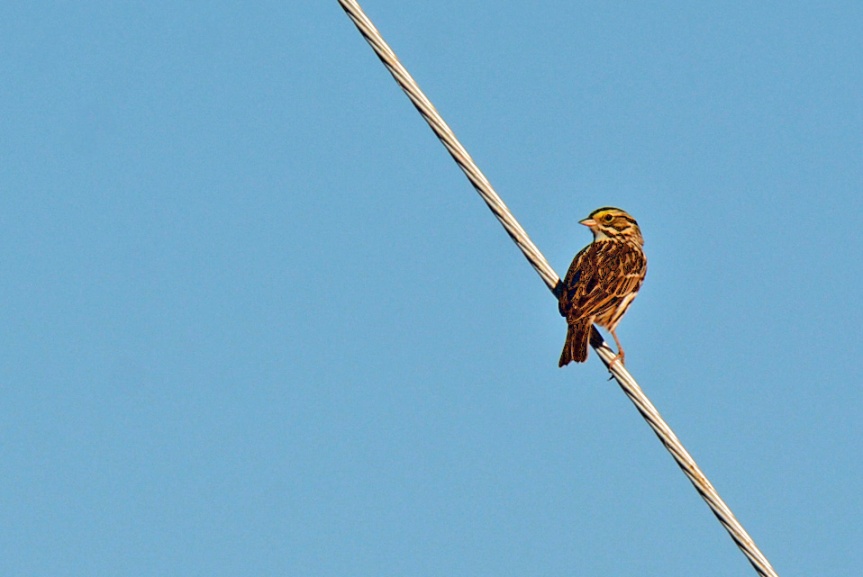 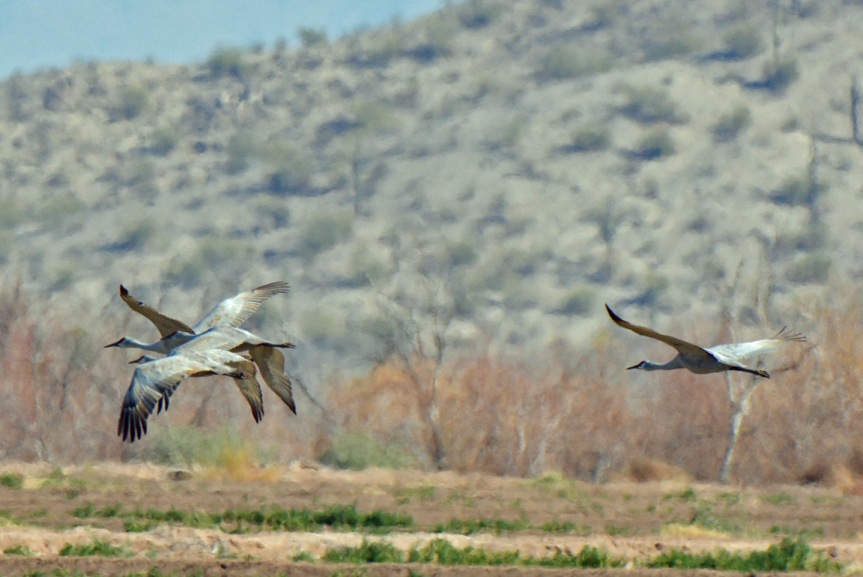 We saw about 12 cranes, they were lifers for me, as were Brewer’s Blackbirds (no pic).

The following 3 shots were taken at a strange and not very attractive place called Robbins Butte Wildlife Area, run by Arizona Game and Fish Department. The sound of gunfire accompanied us. We did both get a lifer there called Bell’s Sparrow but neither of us got photos. We just saw it briefly and clearly through her scope and then it took off.

We drove over to Lake Pleasant Regional Park in search of 2 particular rare waterbirds and found neither. 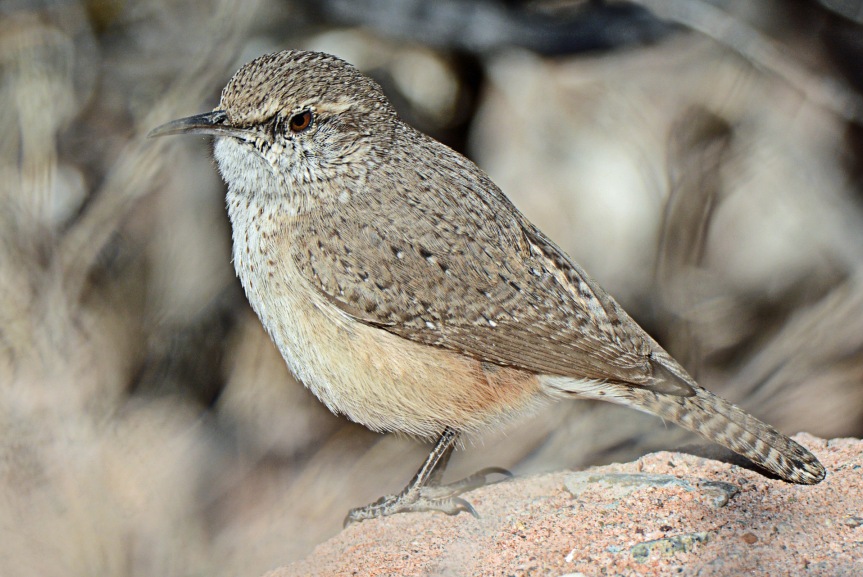 The other day Karen and I went to Seven Springs, where Tony and I went in December (post). It was cold, windy, raining and hailing and there were very few birds out. We did drive up Humboldt Mountain, where the FAA radar facility is, and it was a gorgeous drive on a narrow but paved road. Once again, I only had my birding lens so no photos. That is on my “return to” list.

I love this bird, who I used to call “Yellow Bird,” but now call “Tink,” because of the sound she (might be a “he”) makes. As I’ve mentioned before, this is her third year to winter in our yard. I’m assuming it’s the same one because it’s always only one bird and they do often migrate to the same place.

A couple weeks ago, Tink became Lifer #390 for a local birder that I know, Karen. Karen’s life count is way ahead of mine but, after seeing Tink’s photo on Facebook, Karen told me she needed this bird for her life list and I told her it was pretty much guaranteed that Tink would show up if she came over. Whew, Tink did eventually show up! That was my first experience delivering a life bird to someone in my own backyard.

But, coincidentally, the day before Karen came over, there was a lot of bird action in my yard. That day I got yard bird species #34, 35, and 36! Sadly, some of the pics are lacking in quality but I’ll show you anyway:

I went out to put out the daily bird food quota and heard a very light drumming sound. This bird was in our pine tree and flew off just as I noticed it. I got my camera and came back out and a couple hours later, it showed up again, just briefly enough to fire off a few bad shots. I thought it was a Red-naped or Red-breasted Sapsucker and asked the ABA (American Birding Association) experts what they thought. Some thought Red-breasted and some thought a hybrid of the two and requested more photos. Well, the bird never showed up again while I was out there…until today but when I ran in to get my camera, it flew off again! At any rate, I know it’s still in the area so I still have hope that I get a good shot soon. Neither of those birds would be lifers for me but if it’s really a Red-breasted Sapsucker, they are uncommon for the area and it’s possible that some local birders might want to come to see it if it’s a regular visitor. Hence, the buses…I like to think of busloads and van loads of birders dropping over to catch a glimpse. 🙂

Species #35 was this guy circling overhead:

And, of course, a few days ago, it landed right in a tree in our front yard! Once again, cameraless, I ran inside to grab my camera and off it flew. It would have been a great closeup.

The day was so fruitful for me in my yard that I stayed outside for a few hours, hoping the sapsucker would return again. Just as I was getting ready to go inside, 2 of these showed up, species #36: 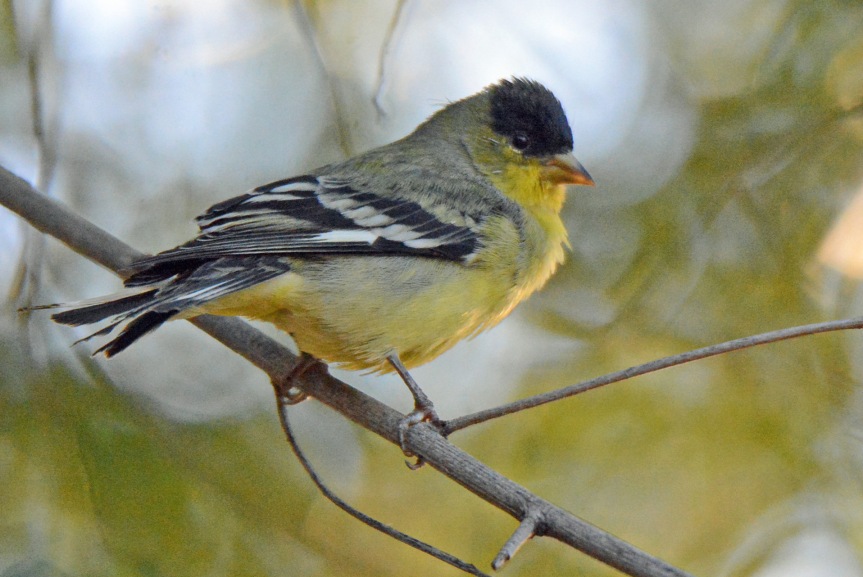 I’ve not seen them since but I was certainly surprised to have 3 new bird species in quick succession. I think I saw 17 different species in my yard that day. Here are a few more:

He’s all alone and has been here for several weeks, just hanging out with the House Sparrows. 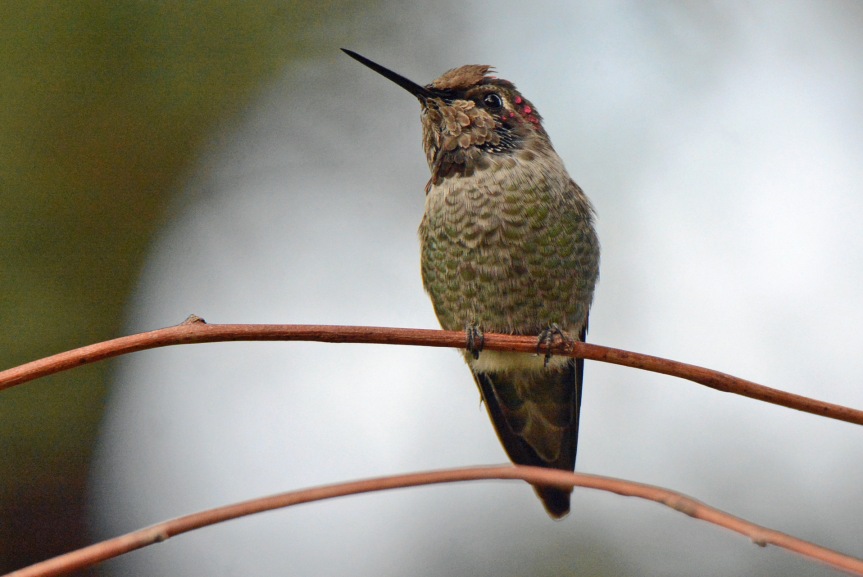 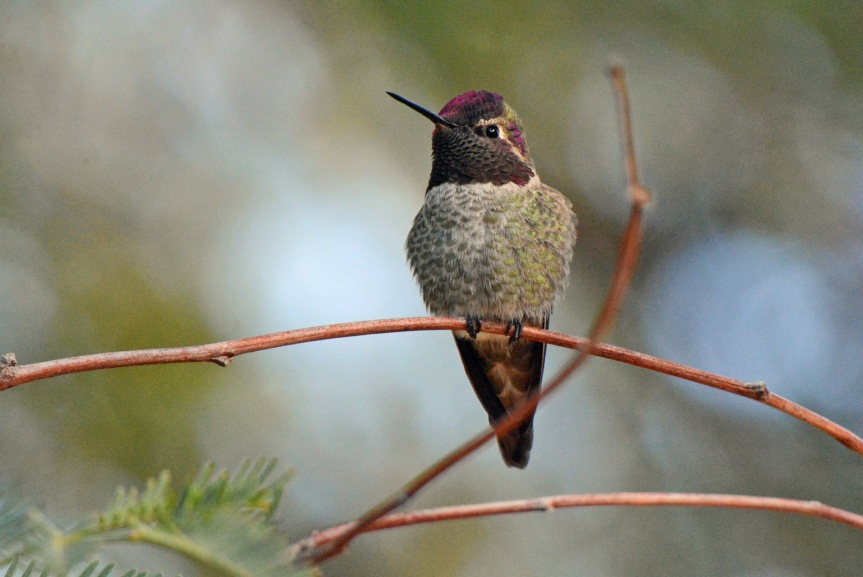 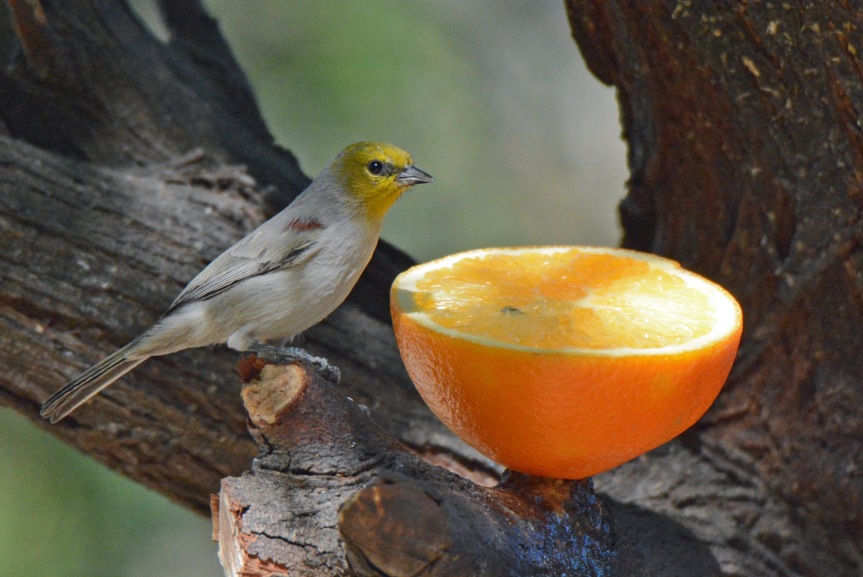 And, I believe this particular bird is now spending its second winter in our yard: 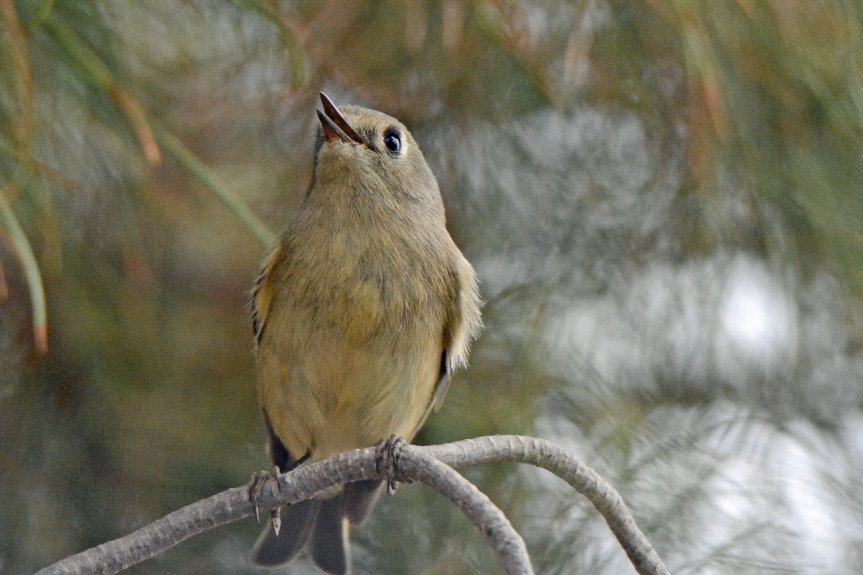 We’ve been fortunate to have some cool days in Phoenix lately, before the true summer heat begins, so last week we took a local trip about 30 miles away to Usery Mountain Regional Park (a county park). It was very pretty. We made another stop first that I didn’t care for as much so I’ll put that at the end of this post… 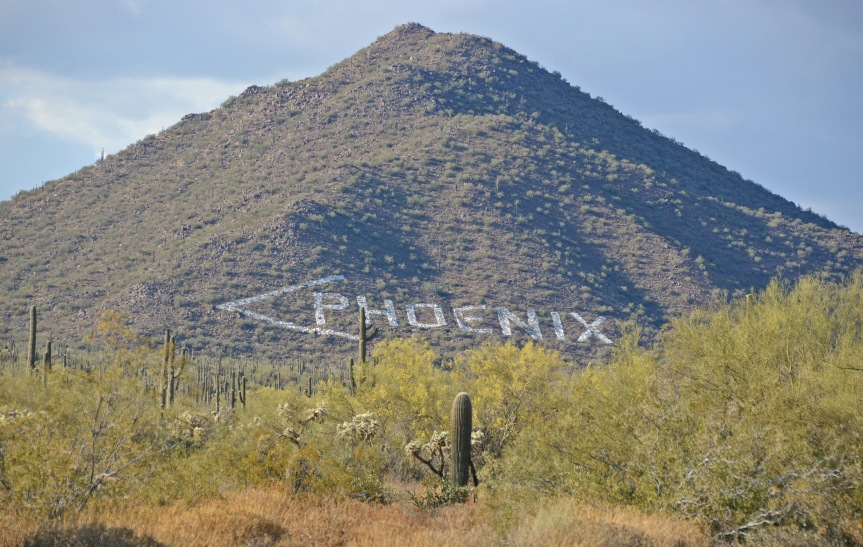 I was glad to finally see this sign above. It has been around since the 1950s (although I’ve also heard it was already present during WWII) when a Boy Scout troop built it to help direct pilots to the Phoenix airport, 20 miles west. It’s made of rocks from Usery Mountain: each letter is about 100 feet high and 12 feet wide. The sign is 1,000 feet across and it took 5.5 years to assemble. More on this marker here. 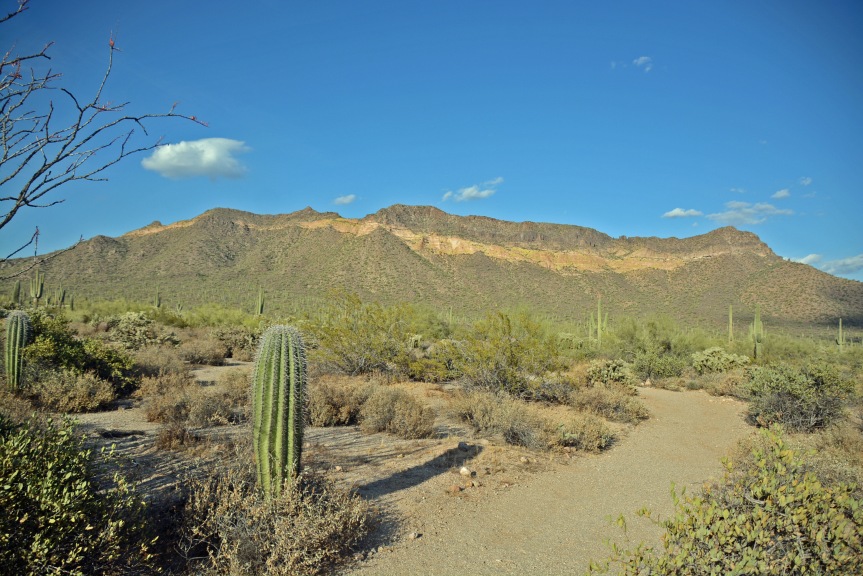 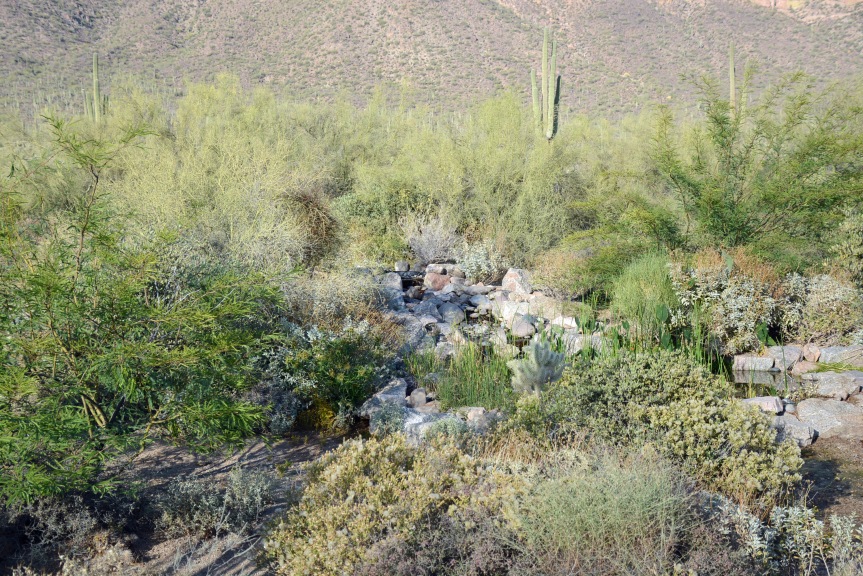 This little pond and waterfall draws wildlife in for drinks and baths. 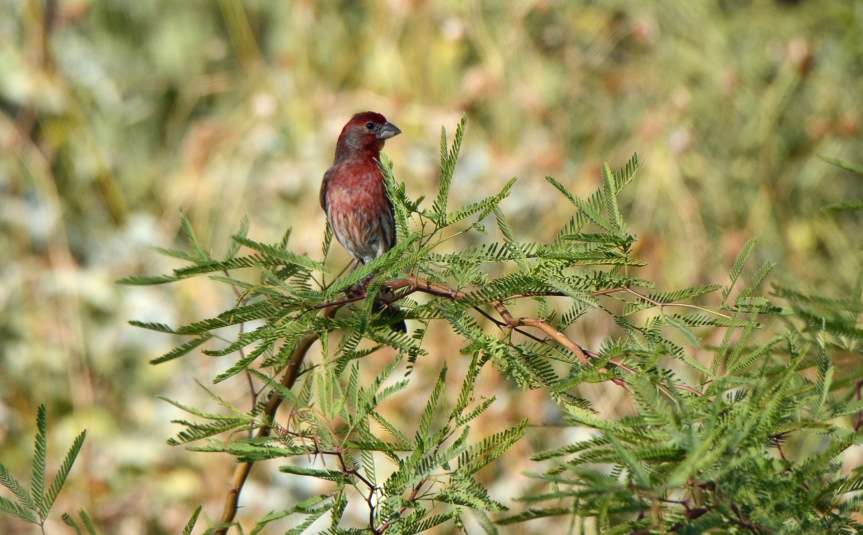 The Nature Center at the park had feeders set up behind it. I always appreciate feeders to draw birds in. No lifers but lifers aren’t everything…I guess.

This is the view looking south toward Apache Junction.

Our original destination that day was Red Mountain Park in east Mesa, where we went first. We had heard they have a wetlands area. Well, sort of, but not really. This park did not thrill me at all. I’m sure it’s nice for a city park if you live close by but it wasn’t worth the drive (to us).

The place was dominated by grackles and doves. We saw a few other birds but they’re the sort of birds we see at most of the ponds and lakes around town. 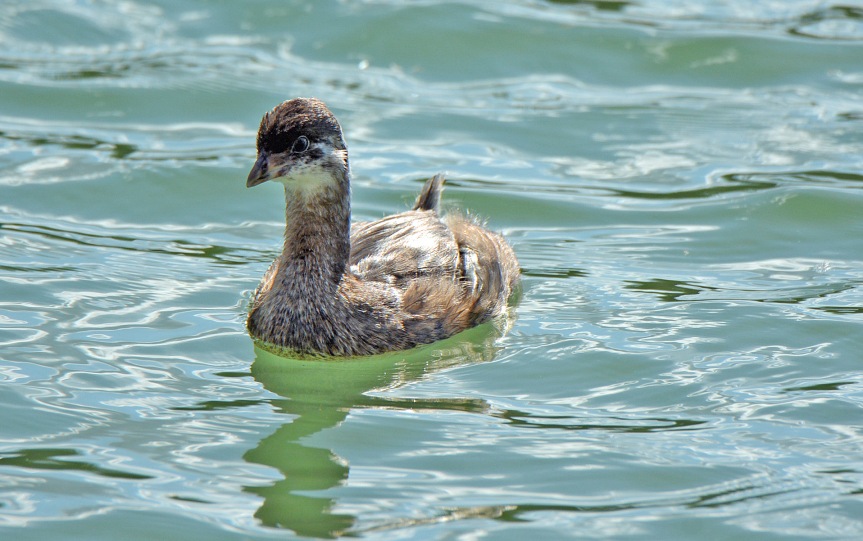 The highlight of that park was seeing this Snow Goose, which should really not be in the area and shows up on the rare bird alert regularly. It must either like it there or it can’t fly although it certainly looked fine. I’ve seen a migrating flock of these before but never one up close like this. It is a handsome bird.

Oh, the very first shot of the hawk on the saguaro? It cost me $24. I took it from the side of the road and laid my lens cap on my car. Hours later I remembered. It’s a big cap, 95mm. The replacement just arrived now.